1 hour of music created to accompany the 2018 publication of DRAGA (Diario de postas 2008/2018), book of poetry by the Galician poet Claudio Pato.

I asked Claudio Pato (Ourense, 1962) one evening during a balcony party (a festa da terraza) if he wrote lyrics. He leaned in and said he enjoyed freestyling with some friends of his in Ourense, and that I was free to take anything he’d written and adjust it to my needs. “Ti fai o que queiras,” he said. Thus began a loose process of collaboration leading up to his publication of DRAGA (Diario de postas 2008/2018). We met a couple of times and I recorded the poet’s voice and then fit it around sound, or created music to accompany certain poems.

*The recordings of the poems below and others available here at Archive.org in WAV format for downloading and use (Creative Commons licenses).

Five pieces, one for each chapter of DRAGA, plus postlude.

«Lugar Incerto» was originally written for my band, with words by Pato. It serves now as the album’s postlude, since its first verse echos the poet’s final words from «Pancreas.»

Improvised pieces for piano and voice 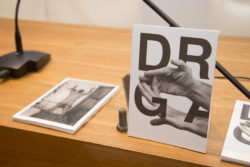 The DRAGA pack, with book design by X. Carlos Hidalgo (NUMAX), photography by María Esteirán, and poster by Edita Oca.